You are here: Home - Pages - About Us

Joe Seme was born in New Jersey in 1946, but has lived most of his life in North Carolina.  He is a 1968 graduate of Florida State University with a degree in English and a concentration in American literature.  He served in the Marine Corps and owned a nightclub near Sugar Mountain in the early 70’s.  Entirely self taught, he began to paint full time in 1973.  After twenty years in the North Carolina mountains, he now lives on a salt marsh in Wilmington.

Seme is well known for his major “trompe l’oeil” (fool the eye) realistic still life paintings which  are carefully researched and set up in his studio and may take three or four months to complete.  Many of these pieces utilize old books, decoys, guns and other sporting memorabilia from hunting and fishing, baseball, golf, and equestrian themes, as well as favorite regional antiques, old corkscrews, tin toys, weathervanes, carousel animals and other folk art.  Joe is a consummate packrat and collector of “stuff,” which ultimately ends up in paintings.  His studio is like a museum.

His work has been featured in dozens of publications including American Artist, American Art Review, The Arts Journal, Ducks Unlimited magazine, Wildlife in North Carolina, Chesapeake Travel & Leisure, Mountain Living and many others.

Joe has been a regular exhibitor at the prestigious Waterfowl Festival in Easton, Maryland since 1978.  He is a Charter Member of the Waterfowl Festival’s Hall of Fame.  He has exhibited at the Southeastern Wildlife Festival numerous times and was given a Twenty Year Retrospective at St. John’s Museum of Art in Wilmington.

To really get to know Joe, please read the “History” of his paintings. 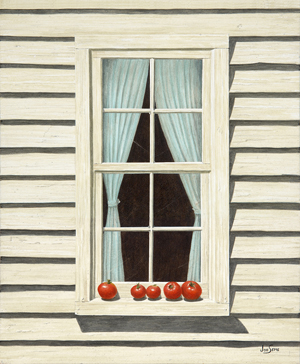